"Energetic and honey-voiced, his long dreadlocks swinging in the breeze, Xavier sang feel-good songs on the Seattle Center lawn, about how we should take care of the planet and be good to each other. His grooves were fetchingly danceable. He and his band kept surprising with eclectic riffs, off-center rhythms and fresh instrumental combinations."
- The Seattle Times

"Seattle's ADRIAN XAVIER doesen't screw around with reggae. He's not gimmicky, and he's not trying to capitalize on the memory of an era that has been already been thoroughly exploited. Xavier is reggae musician in the grandest traditions - exploring themes of pacifism, wonderlust, and the glory of religious experience and natural wonder. Infact, it'd be inaccurate to limit him to just reggae, as he incorprates elements of soul, dub, hip-hop, and rock 'n' roll into the show. Xavier's brimming over with authenticity and, perhaps more important, danceability."
- THE PACIFIC NORTHWEST INLANDER

"Adrian Xavier’s music lifts you up and makes you feel like you can achieve greatness. Seattle born and based, you can catch Adrian at festival’s like Bumbershoot and on hipster radio KEXP. You’d be wise to do so! Adrian Xavier’s album Miracle is just what you need to lift your spirits."
- The Highway Girl

College Programer
Katie Rodregeus
"Music was wonderful and enjoyed by all who heard it."

"This is one of my favorite bands from Seattle, no bone's about it." - Yagi's Music World.

Xavier’s energy and good vibe music carried his set. Mid-way through the first song, the crowd began to feel the groove and started to wander out onto the dance floor. By the kickoff of the second song, nearly everyone was in front of center stage slowly winding their bodies. The dancing wasn’t limited to just the audience. On stage, Xavier and his accompanying band continued to frolic around as they seamlessly transitioned from song to song. - From http://www.seattleshowgal.com     8-19-09


Adrian Xavier, Lead Vocals, Guitar & Percussion. Born in Seattle, he grew up surrounded by the music played by his father, a radio DJ, in the 80's. Adrian's musical background gave rise to an environment which allowed him to create songs that appeal to a broad cultural range of people. Adrian has been a performing artist for more than 20 years and has shared the stage with many well known musicians. While a member of the "Pure Water Band", they opened for "The Wailers (of Bob Marley fame) and also for the famous Jamaican ska and reggae musician Jimmy Cliff. Adrian formed the "Adrian Xavier Band" in 2000, and has been performing in and around Seattle, various cities in the state of Washington and touring the world - DC Bebop http://www.dcbebop.com/dcbmusic-6_US_West.asp

Album Review of Adrian Xavier's R Nature Record 2004
"This is the debut of a fresh talent out of Seattle, and we just love it! Some really good songwriting and singing here, the production-work is excellent"
- Orange 94.0 das Freie Radio Austria

“I chose to bring him to campus because I really like his laid-back
personality,” junior Allison Lindell-Ross, cultural events chair of the Linfield Activities Board, said. “His peaceful message seemed very appropriate for Diversity Week.”

Xavier is full of personality. Growing up in Washington with a human rights activist for a mom, he was exposed to some of the most prominent environmentalists of today. With a Los Angeles disc jockey for a dad, he started studying music at age five and met many industry professionals early on.“At 10 years old, I went to my first concert, Michael Jackson and the Jackson Five, and sat with Dick Clark,” Xavier said.

Performing with Xavier was guest electric violinist Geoffrey Castle. Castle and Xavier often perform in each others’ ensembles for various shows.

His performance at Linfield coincides with the release of Xavier’s newest album, “Miracle.” Xavier said this new album reflects his growth as an artist, and calls it his most mature release to date. Xavier said he has had the privilege of performing in Bend, Portland and Eugene, but this was his first time in McMinnville.

Following suit, all of the Xavier’s merchandise is manufactured using sustainable practices andAside from making music, Xavier said his band is committed to raising awareness about the environment. “I want to encourage people and inspire them to have a low impact on the environment,” he said.

Xavier said he has had the opportunity to participate in numerous festivals and events, where he can act as a resource on environmental issues, and gets to work with environmentally friendly companies. “I’m excited to see that people are starting to wake up and say ‘We don’t have to live that way, with all the polluting; we can move toward the future,’” Xavier said. Xavier’s music is available on iTunes; his current No. 1 seller is the single “Mother Nature.”

Earth Day Celebration at Ashkenaz: Wednesday, April 23, 2008Ashkenaz celebrates Earth Day with conscious music from the Adrian Xavier Band and Joe B, preceded by ecologically-themed short films. Seattle’s Adrian Xavier has been performing for almost two decades, starting the band Pure Water in 1997, and under his own name since 2000, singing and playing reggae-rooted world music that adds in rock, hip-hop, jazz and soul. His 2004 debut CD, “R-Nature,” features such original songs as “Mother Nature” and “Redemption Road.” On lead vocals and guitar, Xavier is backed by a globe-trotting band featuring keyboardist Mark Cardenas, violinist Geoffrey Castle, Jamaican-born Lennox Holeness on bass, drummer David Carpenter and lead guitarist Brian Ray. www.adrianxavier.com Joe B, the leader of The Flux, will also be making special guest appearance debuting his new acoustic project! Presented by the Berkeley City College Green Club and Ashkenaz, the Earth Week Film Festival offers free showings of three movies, totaling approximately 80 minutes: “Sidewalk Stories” by Hannah Chauvet Commissioned by the Ecology Center to celebrate the 30th anniversary of their Curbside Recycling Program, a brief history of the recycling movement in Berkeley. Shows interviews with some champion recyclers - winners in the Cash for Trash contests. Shows how the materials are sorted and follows the baled recycled materials to the Oakland port. Chauvet will appear in person to discuss her inspiration for making the film. “The Recyclergy” by Jeremy Kaller www.recyclergy.com San Francisco Bay Area recycling pioneers share their insightfully hilarious thoughts and stories on garbage collection, treasure hunting, Jack Benny, and the products we buy. Featuring music by Rube Waddell, The Recyclergy is an entertaining examination of a fading subculture. “The Story of Stuff” narrated by Annie Leonard www.storyofstuff.com An animation of the consumerist society, “‘The Story of Stuff’ is a 20-minute, fast-paced, fact-filled look at the underside of our production and consumption patternsÉexposes the connections between a huge number of environmental and social issues, and calls us together to create a more sustainable and just world.” Doors at 7pm; music at 9:30pm; Free films from 7:30pm-9pm.Location: Ashkenaz, 1317 San Pablo Ave., @ Gilman, Berkeley Time: 7pm. 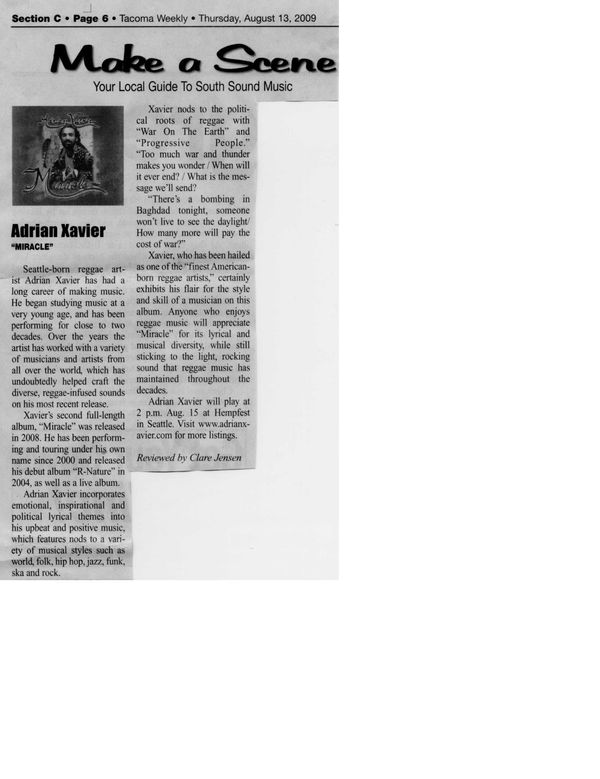 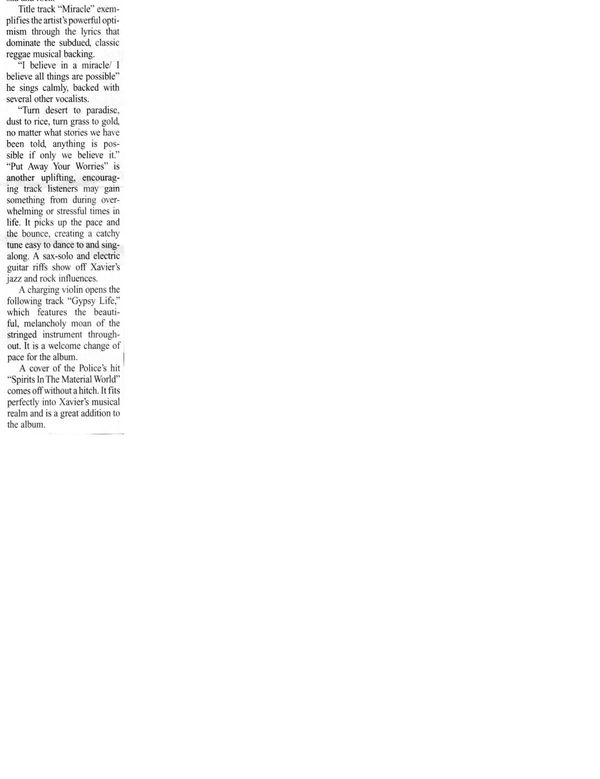 The ASWSU Student Entertainment Board opens its 2004-05 concert series with a reggae-inspired lineup at 7 p.m. this evening at the Thompson Flats in celebration of Cougfest 2004.

The Thompson Flats are located on Spokane Street next to Sloan and Carpenter Halls. “It is a ‘welcome back’ to get the students jazzed up for the coming semester,” said Nur Sarnik, assistant director of the Student Entertainment Board. Sarnik said this is the second Cougfest concert the SEB has organized, and the event will be free to the public again. Last year the SEB featured Seattle’s own Maktub on top of the New Holland Library in front of a crowd 3,000 strong. “We wanted to give the students the opportunity to go out and see a quality, free show,” Sarnik said. “It gives them a chance to relax before things get rolling.” As an organization, the SEB hopes to draw a crowd as large as last year. This is one reason they chose a reggae concert, Sarnik said. “Everyone can get into a reggae beat,” he said. “It’s going to be two awesome bands from Seattle. I would encourage students to go because it’s going to be free.” Little Big Man has been playing the West Coast for three years and will open the Cougfest concert. Locally they have played at John’s Alley, in Moscow and the University of Idaho. Vocalist and guitarist Jeff Burdick describes their style as roots reggae inspired by musicians such as Bob Marley, Steel Pulse and Natural Vibes. Burdick said the group’s live show changes nightly, but combines strong harmonies and high energy to inspire their audience. “We try to make each show different to make it interesting for us, which in turn makes it interesting for people who come and see us,” Burdick said. Headlining the concert is Adrian Xavier, an entrepreneurial reggae artist who has performed professionally for more than a decade. At a very young age, Xavier met a number of international reggae artists and became motivated by his family’s involvement in all things music. Xavier said his influences range from Bob Marley and Jimi Hendrix, to Spearhead and The Roots. He describes his musical stylings as a fusion of reggae, funk, jazz and hip-hop. “It’s definitely reggae with a lot of the elements of contemporary or mainstream music,” Xavier said. “It’s high energy dance music.” In addition to his musical talents, Xavier said his songs address social issues through an unobtrusive approach. “My music is a serious message, but at the same time keeps things positive and really universal,” he said. “It’s something that is for everyone, you know?” Xavier has been active in the music scene throughout the west and in Moscow, but will be making his first trip to Pullman. “I definitely try and connect and get the crowd participating and happening,” Xavier said. “I feed off of the crowd, so I try to get everyone feeling good.” Xavier recently released “R Nature,” his newest album, which is getting rotation on college stations on the westside.        www.dailyevergreen.com/story/9102
Historic Building is blessed with one last concert:

The Wenatchee Valley College at Omak Associated Students will sponsor a dance and performances by the band the Mighty Lions and musician Adrian Xavier at the Paramount Bistro in Okanogan on Saturday, April 9, at 8 p.m. General admission is $5 at the door and WVCO students get in free.

The first performance will be by the Mighty Lions, a band from the Omak area that performs mostly original reggae and hip-hop music. The band’s singer, Craig Cohoe, is a student in the WVCO Nursing program. The Mighty Lions has headlined the Okanogan Barter Faire and took part in the Traveling Roadshow series last year, in which WVC at Omak students brought music to surrounding towns that the college services.

The second performer, Adrian Xavier of Seattle, released a solo album in 2004, R. Nature, which includes a variety of music genres, including reggae, soul, jazz, rock and hip-hop.

On his Web site, Xavier says of R. Nature, “These songs reflect my concern for the future of the planet. The CD is dedicated, with thanks to my many inspirations, to equal rights, truth, justice, the traditional peoples and the innocent victims everywhere.”

Xavier has performed at clubs throughout Seattle, at the Wow Hall in Eugene, Ore., and has toured the West coast to promote his new CD.